Ten Birth Stories of the Buddha 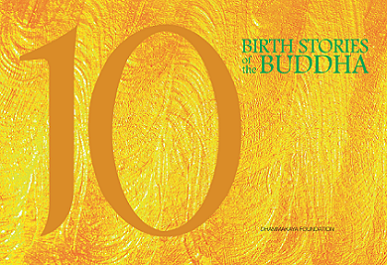 The Jataka Tales are narratives about the previous lives of the Buddha before he was born for the last time as the Enlightened One. There are more than five hundred stories of the Buddha’s previous lifetimes, of which the final ten are regarded as the most important. These are called Dasajati Jataka, which means Ten Birth Stories of the Buddha.
In all the Jataka Tales, the Bodhisatta (Buddha-To-Be) practiced one or more of the ten virtues, all of which must be perfected in order to become a Buddha. The final ten birth stories show the culmination of his countless lives in which all ten virtues are brought to the state of perfection. Each story depicts one of the Ten Perfected Virtues.
The Jataka Tales are stories from a time and place different from our own. The people in this time and place are different from us in terms of their overall conditions, lifespan, and physical and mental abilities. Buddhists believe in merit-power, a transcendental energy that makes wondrous things happen for those who have accumulated abundant virtues, such as the Bodhisattas. This explains the reasons for many supernatural phenomena and miracles that happen throughout the Jataka stories. We hope the reader will find these stories interesting as well as inspiring.